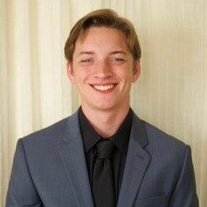 The very first thing I wanted to be was a physicist. For career day in the third grade, my dad borrowed a white smock from a local restaurant that sort of looked like a lab coat. We put pens and pencils in the front pocket and he gave me some of his safety glasses to distinguish me from any would-be doctors. That same year he got me a periodic table that I would stay up late at night trying to memorize (I can still remember the first 40 elements or so). On the family computer, I read about black holes, the big bang, Schrödinger’s cat—only to quickly relay this new information to family members and unwilling friends. The idea that everything could be reduced to atoms, which could be reduced to even smaller composite particles was such a profound idea to my young mind.

Unfortunately, I wasn’t destined to become the next Einstein. My love for the laws governing the cosmos was quickly overtaken by an affection for the chemical basis of life. I took three chemistry classes throughout high school and nearly majored in it here. But like physics, my interests in chemistry were eventually given up for today’s fascination: neuroscience.

When I look back on my life I think it becomes fairly clear why I eventually settled on neuroscience. Truth be told, physics, chemistry, or a more generic biology career would have satiated me just the same, save for one thing—my mom. Her struggle with a debilitating psychiatric condition has been the backdrop to much of my life. I think the early experience of watching a brain behaving in an atypical way never left me. Why should the most evolutionarily advanced piece of machinery be so prone to malfunction? Why such undeserved suffering? I became deeply uncomfortable with the idea that at any moment a person’s being could be stripped away by any myriad of conditions. What did that have to say about us as people?

Soren Kierkegaard wrote that “Life can only be understood backwards; but it must be lived forwards.” As a kid, I just wanted to understand. That’s all scientists ever want: to understand; to follow their questions till they reach some sort of catharsis in finally knowing a little bit more than they did the previous day. That’s what I am driven by. The brain, in my opinion, is one of the last true frontiers of science. My time spent in the lab feels like an expedition to the unknown. Nothing would make me happier in this life if I could plant my flag somewhere and know that I contributed: a dwarf atop the shoulders of giants. Science is for everyone, and while it’s easy to remember names, scientific discovery is driven by the same hunger for knowledge. That is what unites scientists and that is what makes science great. With a little hard work and a lot of luck, I hope to pave my way through the brain so I can make the world a little bit more knowing than before.

Outside of the lab, I’m a huge bookworm, cinephile, outdoorsman, and foodie. My favorite types of books and movies are philosophical. I currently have the entire history of western philosophy sitting on my bookshelf along with several novels and some neuroscience books. I like asking “the big questions” on life and I think books and movies are a great way of analyzing what it means to be human. When I don’t have my nose crammed in a book I like to be outdoors. Growing up in Minnesota gave me a vast appreciation for the great outdoors. I’m as stereotypical outdoorsy as you can probably get. There just really isn’t any greater ecstasy than nature. Above all else, I enjoy the gluttonous side of life. Food is such an integral piece of human culture that I taught myself how to cook. I enjoy sharing my passions for cuisine and coffee with all of my friends. The best dish I can probably cook is beef bourguignon or my spaghetti carbonara. Something I think we can all enjoy is a nice meal with a stiff glass of espresso to wash it down.

It’s Such a Beautiful Day/2001: A Space Odyssey

Give me the bean water

Passion. There isn’t much else that doesn’t immediately follow being passionate about what you do. Reason is possibly what guides scientists but it is a deep passion that drives them. There is little to nothing else that matters. Science is for everyone, all that’s required is love for the process.