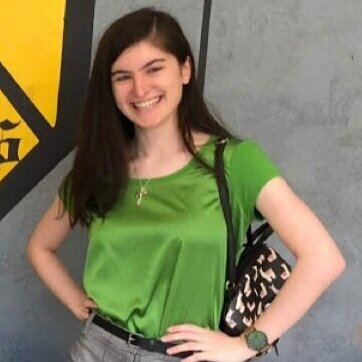 My path to science was not a straight one; it was full of experiences that can only be summed up as “being in the right place at the right time” and “sheer luck”, which when combined with my determination to find an answer to my constant stream of questions, resulted in me ending up where I am now. Over the years, though, I’ve discovered this mix of passion and luck is also how science works!

My first example of ending up in the right place at the right time is my choice to apply for a spot in a STEM-focused high school in my area and getting in for the science track. Thanks to this, I was given the opportunity to apply for a lab, in which I worked on an independent research project that, although admittedly very simple, let me throw myself right into the deep end of research: reading through countless papers, puzzling my way through protocols, and of course dealing with the stress of being a good parent to my flasks of cells. Three years and a mostly completed project later, I was confident enough to start presenting my work at conferences, where I learned how welcoming other scientists were, both newbies like myself and people who have been in the field for years. The environment was one of the reasons I continued to pursue science throughout high school, as the field contains some of the most passionate individuals I’ve met.

Another thing I applied for on a complete whim was a surgery program. It was organized by another lab, and I was visiting a friend when her PI mentioned to me that there were still a few spots open in the program. At that point in time, I did not anticipate going into medicine, so it would have been logical for me to just completely disregard that, especially considering that I was midway through taking a very heavy class load. I applied on little more than a gut feeling, and nobody was more surprised than I was when I not only got in, but accepted the position. Despite my misgivings all the way up until the first day on the job, doing that program ended up being one of the best parts of my year and became the reason why I chose to start going down the medical path.

Finally, ending up at BU as a neuroscience major was the result of a last-minute change of heart. I was admitted as a bio major, but two weeks before classes began, had the sudden urge to go neuro after realizing that all of the classes I was excited about taking were the neurobiology classes. It didn’t make much sense to me to have to wait two years to take the classes I was excited for now, so I sent a very frantic email to my advisor at what was probably a very unreasonable time of night and was able to get a spot in Intro Neuro for the fall. It was in that class that I was first formally introduced to the concept of engrams, which instantly sparked my curiosity. I ended up in office hours later that day, ready to find out everything my professor knew about engrams. I stumbled upon the Ramirez Lab page when reading more later that day, and I knew that this was the lab I wanted to work in. Currently, I am very excited to continue expanding my knowledge and keep working hard to find answers to all of my questions: both the ones I have already asked and the ones I will come to ask in the future!

In high school, I discovered a passion for Model UN. Even though it looks like my interests in science and medicine are taking me down a completely different road, the friendships I made on the circuit and the skills I’ve picked up from debating have made me a more well-rounded person. Even now, I still staff the conferences that BU runs as a way to keep myself informed about current events and remind myself of the world outside of STEM.

And Then There Were None

Friend, but not the one you should call when you’re up late at night

I grew up in Brooklyn and then moved to New Jersey, but I still call myself a New Yorker, much to the chagrin of those who lived in the city longer than I did.

If you have a willingness to learn and collaborate with others, you’ve got yourself a scientist!