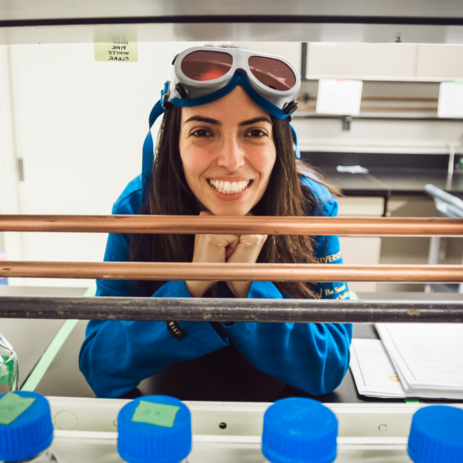 I once took a science & humanities class in which the teacher posed the following question: “What is the first memory you have about being a scientist?” My mind immediately went to the first formal experiment I could bring to mind from a science class. I was maybe eight or nine years old, and our entire class had gathered around a table full of plants with popsicle (measuring) sticks planted into the soil. Our task was to make observations about the soil, across the different plants and watering conditions. I diligently transcribed this memory onto the index card and then handed it back into the front of the classroom, curious what my fellow classmates – many of whom were humanities majors – had to share.

As it turned out, many students had simply shared childhood memories of being outside and playing such as digging up holes in their backyard, holding wriggling earthworms in the palms of their hands or noticing a rainbow for the first time. I realized then that my first memory of “being a scientist” actually reached further back in time than my first classroom experience. I understood that despite growing comfortable with the label “scientist” as an undergraduate working in labs, and majoring in neuroscience, that somewhere along the way I had forgotten there is more to science than the accumulation and understanding of facts. It’s just as much (if not more importantly) about the spirit of curiosity and wonder with which you observe the world around you.

This is all a very round-about way of saying: I can’t tell you the exact moment I “got into science” as I’ve been asking questions in wonder about the world for as long as I can remember. Somewhere along the way, I chose to align myself with a career that explicitly and formally supports the drive to wonder, question, observe, and repeat. So here I am. Ready for play – erm, work.

As undergraduate student at the University of Texas at Dallas, I pursued my growing curiosity for neuroscience research by pursuing a position in Dr. Tres Thompson’s Aging and Memory lab. I am forever grateful to Dr. Thompson for allowing me the opportunity to work directly with a graduate student on this project, as it gave me the chance to bridge what I was learning as a student in the classroom to what I now understand all the action occurs: in the lab. While there, I worked on a project which demonstrated the effectiveness of the drug D-cycloserine (DCS) in improving learning and memory by enhancing after-hyperpolarization (AHP) mediated plasticity in the rat hippocampus.

In the summer of 2008, I graduated with my B.S. in neuroscience and began working at the Laboratory of Molecular Pathophysiology (LMP) at the National Institute of Mental Health (NIMH) with Drs. Husseini Manji and Guang Chen. The primary aim of the LMP was to elucidate the mechanisms of mood regulation by taking a two-pronged approach: (1) by investigating how current drug treatments for mood disorders exert their therapeutic effects, and (2) by using animal models to study facets of affective disorders, including major depressive and bipolar disorders. To this end, I focused primarily on fine-tuning a learned helplessness paradigm, and used a battery of animal behavioral tests to evaluate temporal profile of ketamine.

Ultimately, my experience working at the NIMH reinforced my commitment to research as a long term career, and in 2010 I began as a neuroscience graduate student at the University of California, Davis. During my time as a graduate student, I worked in Dr. Brian Wiltgen’s memory lab and tested a core claim of the systems consolidation theory: newer (recent) memories are hippocampal dependent while older (remote) memories are hippocampal independent. To this end, I used transgenic mice with targeted viral approaches to pharmacologically and optogenetically silence hippocampal activity during remote memory retrieval in the contextual fear conditioning task. The story got a bit complicated (as it often does in research) but bottom line is that optogenetic silencing impaired remote memory retrieval while pharmacological silencing did not. Stay tuned for more from this project. I’m hoping the Wiltgen posse will continue cracking away at this while I’m gone.

Now, as a Post-Doctoral researcher in Dr. Steve Ramirez’s lab, I’m excited to extend the training I received working at UC Davis to projects that are likewise aimed at understanding the neural networks that support memory. Specifically, I plan to manipulate memory traces at different stages of learning, while simultaneously recording the downstream physiological effects of such manipulations, using calcium imaging tools. Ultimately, I hope this project will yield novel insight into how emotional and spatial memories interact and are represented in the brain.

What even is this question?!

Breaking out into song when the mood strikes.