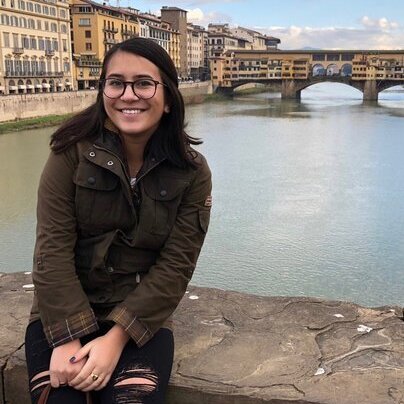 My interest in science has always been prevalent since I was young, when, like many kids, it manifested through a love of animals and fascination with nature. I always had some fun scientific facts up my sleeve; as a first grader, I was strangely well-versed in the different types of clouds (sadly now forgotten). I did in fact go to nature camp for a few summers, when my tentative career plan was to become an ornithologist. Early on, I knew I was passionate about accumulating knowledge and asking questions, whether that be how many species of bird I could spot in my backyard, or how to best track down a deer in a quiet forest.

By the time I got to high school, I was fresh off a third-place prize in a science fair project that involved discreetly swabbing different Boston hotels’ doorknobs, elevator buttons etc, for bacteria to see which ones were really the cleanest. I was excited to grow my own cultures in petri dishes and discover how to take science labs one step further based on my own questions. As an impressionable teenager, I was influenced to believe that having a passion for science meant pursuing a career in medicine. Along with a growing interest in physiology and biology, this prompted me to pursue a pre-medical track while at Hopkins for my undergraduate degree.

I entered Hopkins as a Bio/History double major, but after taking just one introductory neuroscience course (Brain, Behavior and Cognition), I quickly switched over to a Neuroscience (and Art History) curriculum. In my neuroscience classes I was immediately interested in understanding the mystery of how so many different complex brain circuits could generate cognitive processes like memory. Towards the end of my time at Hopkins, this passion to understand the brain and behavior, as well as my experience as an undergraduate research assistant, helped me to realize that I was most excited by a career in scientific research. I found myself motivated to answer the initial, mechanistic questions about how the brain functions in both normal and diseased states, before addressing how this could inform clinical treatments. Working in different laboratories allowed me to appreciate both the endless curiosity and diligence required for basic and applied research.

When people ask where my hometown is, there is some variability in my answer, since I’ve come to call a few different places home. I was born in the Bay Area in California and will always love visiting, especially to have tacos in the Mission in San Francisco. After moving to Boston as a smaller than average third-grader, I grew up in a small town in Massachusetts that had more horses than stoplights, and all those birds in my backyard. After doing my undergraduate degree in Baltimore, I came back home to Boston for my PhD at BU. Thankfully, I get some breaks from the cold visiting my family in LA. Consequently, I know a good number of restaurants in both Boston and LA and always love talking recommendations with anyone that has strong feelings about appetizers like me.

Outside of science, two of my major interests include art and art history. Specifically, the really old ‘boring’ paintings that people generally walk by are the ones I find most fascinating. I love going to museums and attending different talks and exhibitions. Two of my favorite museums include the Getty in LA and the Art Institute of Chicago.

My first research experiences were as a summer volunteer with Dr Craig Stark and Dr John Guzowski at UC Irvine. Before this, I did not know what a career path in academia looked like, but quickly became interested in learning more about working in research. These summer experiences ignited my passion for studying memory in both humans and animal models, as I learned about the hippocampus across model organisms. Specifically, the question of how different kinds of memory can be adversely impacted by aging began to tease my scientific curiosity.

Back at Hopkins, I serendipitously joined Dr. Michela Gallagher’s lab, where I continued to study the hippocampus and aging from a molecular biology perspective. Using a rat model of normal aging, we investigated changes in learning-related and inhibitory gene expression throughout different hippocampal subregions in cognitively resilient and impaired aged animals. My work there drove me to question what specifically about the aging hippocampus/brain made it susceptible not only to ‘normal’ memory network dysfunction, but also more severe deficits seen in diseases such as Alzheimer’s Disease.

My continued interest in the role of the hippocampus in memory and aging motivated me to pursue a graduate career studying the hippocampus, but from a circuit and systems neuroscience perspective. As an NSF NRT Fellow in Neurophotonics, and a student in Boston University’s Graduate Program in Neuroscience, I am generally interested in further exploring the hippocampal circuit in learning and memory using novel optical techniques. I hope to combine methods in multi-photon microscopy, immediate-early gene tagging and optogenetics to investigate how specific cell population activity changes across learning and subsequent memory behaviors. My hope is that combining these systems-level techniques will yield a more complete understanding of how well-characterized circuitry can generate important behaviors such as learning and how these mechanisms are sensitive to deficits in aging or psychiatric disease.

if I’m being honest, any Harry Potter

Florence and the Machine, (Old) Coldplay, The Cranberries

Someone who can provide constructive criticism and new perspective while supporting others around them. Willingness to be a team player and tackle problems together.